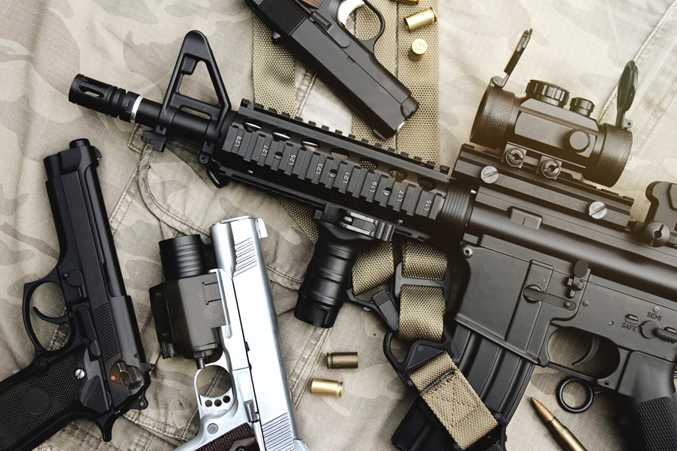 Did you know that jailers once had a key that operated as a fully functioning single-fire gun?

In the 16th century, jailers used key guns to protect themselves while locking and unlocking cell doors. 500 years later, “personal protection” is still the number one reason many Americans purchase firearms.

Whatever your reasons are for purchasing a firearm, it’s important to learn the different types of guns and determine which works best for you.

Keep reading to learn all about the different kinds of guns.

Revolvers are the gun of choice in many western movie shootouts starring Clint Eastwood and for good reason.

Revolvers feature a cylinder with several cartridge chambers. The cylinder revolves around a shaft that lines each bullet with the barrel of the gun. When the gun fires, the cylinder rotates and prepares the gun for another shot.

With double-action-only revolvers, the gun cocks and releases the hammer with one pull for every shot. Most DAO revolvers have an enclosed hammer that cannot be manually pulled.

Handguns are great for those with concealed carry permits. They’re light, accurate, and perfect for personal protection.

There are 4 different sizes of handguns available.

Full-sized handguns are the largest size. They come with 4.5-5 in. barrels and are big enough to comfortably grip.

Pocket pistols, a.k.a. micro-compact handguns are the smallest option. They generally have barrels less than 3 in., fit in your pocket, and are very small in the hand.

Rifles are larger guns that require both hands to operate and fire only one bullet per pull of the trigger. The stock of the gun is positioned against the shoulder for support while firing.

There are 5 types of rifles: lever-action, bolt-action, semi-automatic, break-action, and air.

Semi-automatic rifles eliminate the need for constant reloading and are a common choice among homeowners. They can be customized with all sorts of state-of-the-art equipment like F-1 Firearms products, upgraded barrels, and more.

Assault rifles have 3 modes: semi-automatic, three-shot burst, and automatic. Because they are capable of full-auto, assault rifles are technically classified as machine guns.

A machine gun is a fully automatic weapon that fires continuously while the trigger is pulled.

Heavy machine guns are bulky, powerful firearms mounted to carriers that overheat when in use. They generally have a belt that is fed to them while they fire.

There are 4 different types of shotguns: break-action, lever-action, pump-action, and semi-automatic.

Of these, pump-action shotguns are the most popular. The shells are stored in a tubular below the barrel. A simple pull and push on the forestock loads the shell into the action and readies the gun for firing.

The Different Types of Guns

Guns are an essential tool many people use to protect themselves and feel secure. Now you know a little bit about each of the different types of guns.

For more information about gun safety, sports, and tech check out our blog!