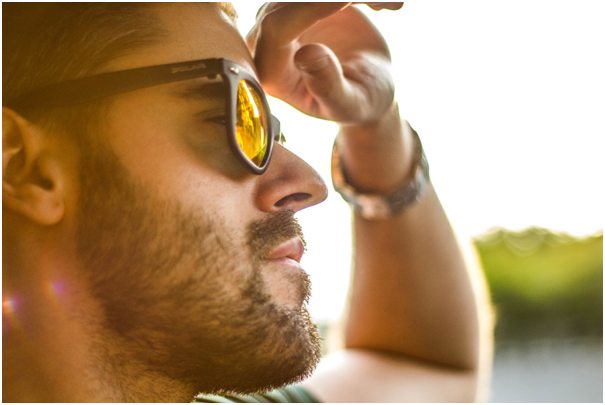 Sunglasses are one of the most needed accessories for today. In addition, they have really rich and captivating history. So how did it all had begin?

Ancient Eskimos used little bone dashboards with slits for eyes, which restricted the amount of sunlight falling into their eyes. In Ancient China women would take care of their eyes to prevent early wrinkles and “eye discolouration”. This is also why they wear special hats with peaks which cover their foreheads and temples. Ancient Egyptian protected the upper half of their face with the help of coloured papyrus. So where do you think they found the first progenitor of modern sunglasses? In the tomb of Tutankhamen – it were two thin emerald’s sawn ends connected with bronze flakes – like frames! And in Ancient India rich beauties stuck strips of silk on their eyelids making permanent shadow for their eyes.

In the XVI century, the ancient Egyptians pounded precious stones, which were used in the manufacturing of sunglasses. Only rich clients could afford such eye-protection. The first industrial batch of sunglasses were put on sale almost 200 years ago in France for Napoleon’s soldiers (because quite often war promotes scientific and industrial breakthrough). The glasses of such products were treated with soot and covered with special lacquer.

XX century is the most advancing period in the evolution of sunglasses. In 1920th, dark sunglasses became fashionable and the trend spread worldwide. Coco Chanel was the main reason. The 1930th is famous for the “aviator” sunglasses. Special glass intercepting all light spectrum with the length of wave which is shorter that 400 mm were used at that time. In the 50s sunglasses finally became the product of mass consumption. In the 60s dark glasses became iconic for youth pop and rock-culture. Then Yoko Ono chose radical black sunglasses as the sign of mourning for John Lennon.

And the last wave of change started in 80s – then the first collections of designer sunglasses appeared. Also, in the eighties the world watched with admiration fiction like “Star Wars” and glasses adopted a bizarre “alien” form. They were decorated with wings, flashed different colours, merged into a single narrow bar. Movie characters dictated the style – for example, the movie “Blues Brothers” with John Belushi instantly made popular the Wayfarer, copied today by everyone from Oakley to Tom Ford Sunglasses.

Sunglasses have come a long way from simply providing eye protection, in addition to being a fashion accessory, they give a feeling of comfort and security, which is so lacking in today’s troubled world.