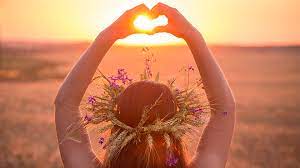 To find the great love and to be able to hold it forever. That is the dream for many people. But sometimes it’s not that easy. Maybe you just haven’t found your great love yet, or you have split up in an argument. Then the fronts are usually so hardened that you don’t know what to do next. For such cases there are many offers for love spells that work. Magic is a broad field and offers a wide range of different spells, rituals and utensils to produce the desired effect. In the following you will find a lot of useful information on the subject of love spells.

The idea of ​​seeing love as magic is no coincidence. The extreme happiness that lovers feel works like a charm and the lovers are “enchanted!” that they would bewitch men so that they could not resist them.

Nowadays being enchanted is a desirable state. Especially people who have not been allowed to feel this feeling of being in love for a long time, long for a partner. If it then does not work with the partner in the classic way, some resort to love magic, which is supposed to bring about what you cannot do yourself: that someone falls in love with you.

The art of magic has been known for hundreds of years and has been practiced ever since. The first love spells have been around since 2600 BC. known and documented in Mesopotamia. Since then they have emerged as the largest group of spells in almost all cultures. At that time, astrology, prophecies and healings also counted as forms of magic and magic was part of religion and science. In the middle Ages in Europe there was a mixture of religion and magic. The non-Christian faiths were integrated into the faith and there was a dichotomy in magic that still exists today. Then all magic was later banned, except that which had already united with the Christian faith.

In the Renaissance, sorcery was rediscovered and introduced into science as magia naturalis. The visible effects of sorcery should explain what physics and mathematics could not at the time. In the 18th century this type of magic was pushed underground, as it was replaced by logical, scientific knowledge. With esotericism, the magic fought its way back into society. Just as new, spiritual natural religions such as the Wicca make use of magic.

There are love spells for almost every situation. Love spells are there that are invented to blossom, toughen or renew a love. But there are also spells that are supposed to recreate a love. Most common in the field of white wizardry is the partner return or partner reunification. A partner repatriation is supposed to bring a partner back to you who has left in an argument or due to outside influences. A partner reunification, on the other hand, should turn a crush, friend or acquaintance into a steady partner. In this way, love should arise from being in love or deeply affectionate.

For couples who want to strengthen their bond, there are so-called attachment spells. They can also be used to turn a looser bond into a tight one. There are also many spells to find true love or undo lovesickness. But spells or amulets or talismans are also offered to protect against such magic. Which love spell is suitable for you depends on the respective situation and intention.