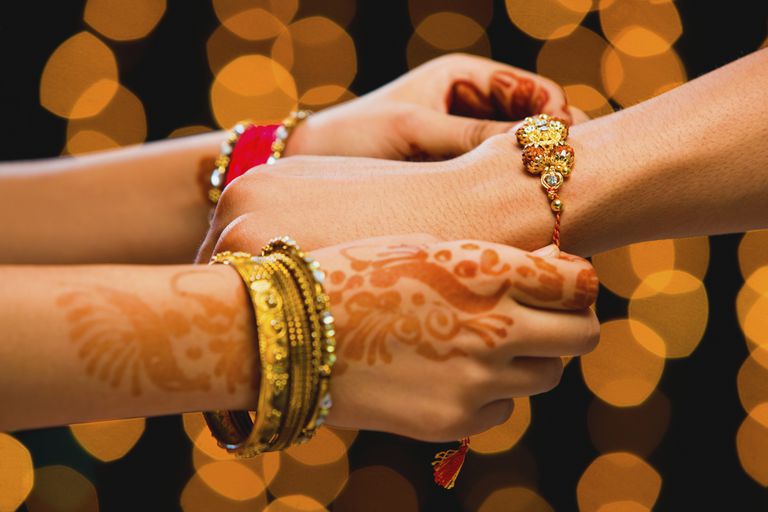 Rakhi or Raksha Bandhan is celebrated on the full-moon day of the Hindu month Shravan or Bengali month Srabon, which falls in the Gregorian calendar month of July/August. On this auspicious day, the sisters tie Rakhi on their brother’s wrists or send rakhis to them, wishing for their long life and protecting them from evil influences. Likewise, the brothers give their sisters a promise that they will protect their sisters from any kind of harm that prevails upon them. Thus, Rakhi gifts have been a form of expression used by the brothers to show the required love that their sisters deserve.

Rakhi is believed to have been started for various reasons across the world and through ancient history. However, one of the most prevalent beliefs in Indian mythology is Lord Krishna and Draupadi- the wife of five Pandavas. On the day of Makar Sankranti, Lord Krishna had cut his little finger, and seeing him bleed profusely, Draupadi cut off a part of her sari and mended the cut by tying the cloth around his finger, and in return, Lord Krishna promised to protect her. Lord Krishna’s protection of Draupadi is forever remembered in mythology. When Draupadi was disrobed, her sari kept getting extended.

One of the best shows of love shared through sending rakhis was the brotherly love portrayal when Bengal was partitioned in 1905. Nobel Laureate Rabindranath Tagore started the Rakhi Mahotsavas to celebrate Raksha Bandhan to strengthen the bond of love between the Hindus and Muslims when the age-old togetherness of these two religions was at the peril of turning into one of the most devastating hate for each other. Rabindranath Tagore tried to emphasize how the outside invaders against whom the people of Bengal should protest. Even after the partition, this tradition continues to live on in West Bengal and the partitioned Bengal, which is now Bangladesh.

Another one of the prevalent rakhi bonds in history was shown between Roxana and King Porus. When Alexander the Great invaded India in 326 BC, his wife, Roxana, sent rakhi to the king of Pauravas, asking him not to harm her husband on the Battlefield. Even in the Battle of the Hydaspes, when Porus saw the rakhi, he could not attack Alexander. Porus lost the battle, but he won Alexander’s respect and honor, who bestowed him as a governor of his kingdom.

Hence, historically rakhi has been one of the key factors in spreading love and protection in sending rakhis and tying rakhis. Rakhi has been restricted to only sisters tying them to their brothers, but it has also been prevalent for any person wishing for a long life by gifting rakhi for a brother.

The relationship between a brother and a sister is as pure as it can be. Starting from their childhood, siblings hold an exceptional value in their hearts for each other and especially how sisters can play a significant role in their brother’s life by providing them with a sense of security and belonging. A brother and sister bond help sustain even the roughest of times. Rakhi is not a yearly show of love, but it is a thread expressing the promise of protection. The one who ties the Rakhi must look after the person who binds the Rakhi to him. A brother-sister connection is not limited to siblings, but also to men and women who have a brother-sister relationship.

Sending and tying rakhis is also a powerful sacred verse of oneness, serving as a symbol of life’s progress and a prominent messenger of unity. It is believed that this tradition began in the Vedic era, but the tradition continues and is prevalent in the form of sending rakhi gifts and receiving e-rakhis for brothers who stay abroad. It still strengthens the bond every year by providing a sense of unity among brothers and sisters who might have to stay away from each other due to their career or personal life.

The modern generation has created a disconnect among people who are even living under the same roof. Still, a rakhi is a form of expression showing love to one’s brother and sister even if they don’t live together. The day of the event creates a reconnect among brothers and sisters who stay apart and are not in contact with each other for a long time.

In India, Hindi movies have played a significant role in catapulting rakhi as a household norm by portraying rakhi in popular films. India has been the origin and the promoter of rakhi throughout the world. Hence, Raksha Bandhan has since become a world-recognized event. It has been used in political campaigns and also in the visit of other nations’ leaders.

Rakhi has not only proven to bring the brothers and sisters together. Still, it has also brought families together, especially when joint families have been turning into nuclear families in the modern ages. No long distances can spoil the essence of Raksha Bandhan, even in this modern generation. Throughout ages, the essence of Raksha Bandhan has been upheld and kept sacred. This beautiful festival promotes goodness and successfully reunites people by transcending borders, castes & creed, and religious differences. A rakhi for any brother in this world means a lot to their sister; it provides a sense of responsibility among brothers and a sense of security among the sisters. Sending rakhis for their brothers and receiving rakhi gifts from them in return has kept the belief of women in men, even after years of the patriarchal nature of India. Now, India is as liberated as it ever was, with great areas of improvement still left to be made but what remains and still prevails is the bond shared through the love of rakhi by brothers and sisters across the globe.